How To Refresh a Vintage Bathroom + Keep the Charm: II of II

As it turns out (but probably not so surprisingly?), vintage bathrooms are very polarizing! We enjoyed reading each and every one of your thoughtful responses to part I of Pete and Rachael’s bathroom refresh, and we quickly saw that there were two schools of thought.

On one hand, we heard the pain points of vintage bath owners; you love your mint, pink and yellow tiles, but you don’t know how to make them work in your day-to-day. We received messages with photos of your own baths attached, and we were honestly green – mint? – with envy over your beautiful spaces! In most cases, a quick coat of paint on the walls would do wonders, in others, a swap for modern plumbing would allow you to see your room(s) with fresh eyes.

On the other hand, many of you thought that the photos from our friends’ bathroom was the after image. And, well, we get it. It’s an adorable space! That said, there were many elements that weren’t working hard enough for their family. While dramatic, it felt closed in and heavy. The tile wasn’t the standout – maybe it was the ceiling medallion? Or the black ceiling? Or the contrast of the yellow crown? And from a functionality standpoint, the shower head leaked and the toilet had its own set of issues! Simply put, the eye didn’t know where to rest, and the homeowners were ready for a makeover. Scratch that, a makeunder. Here’s a reminder of where we started:

Our whole goal was to make Pete and Rachael fall head over heels in love with their vintage bathroom, and we shopped from Lowe’s to bring our vintage bath makeunder to life! We love that Lowe’s has a curated collection of Kohler products, for which we were able to match fixtures they already had (like their existing Kohler pedestal sink) to new (like their Kohler Memoirs toilet!). The best part is that since Lowe’s had everything we needed – and for less! – we had every excuse to help them refresh this bath once and for all.

Here’s a better view of the sink and vanity, before and after:

We started from the ceiling and worked our way down. Paint. Changed. Everything. While we’re normally big fans of dark paint (especially in a small space, see exhibit A and B), it was fighting with that beautiful tile. Dark paint can even help to make a tiny room feel larger; the walls recede, and it can trick the eye. But in this case, the yellow tile provides a visual stopping paint, and the black paint above felt like a dark blanket!

The black ceiling and yellow crown had to go. We removed the ornate medallion in favor of this more streamlined one, caulked all the seams where the crown met the wall (it had never been done!) and gave everything two coats of untinted Valspar Signature Ultra White paint in an eggshell finish. Afterwards, a funny thing happened. Scott and I said to one another, did you realize there was a black tile border? Ha! That stunning black cap along the yellow tiles had blended right into the black paint. Now, it shines.

The sconces were a challenge, because the backplate needed to be at least 7″ in diameter to cover up the junction box. When we removed the old sconces, it became very clear why they were chosen – the bases were barely large enough to cover where the tile meets up to the j-box. You might even notice that the sconces in our refresh are not the same ones on our initial mood board; they fell into backorder at the last minute, so I chose these Quoizel Soho sconces the morning of the makeunder!

Most wall sconces have a backplate of 4-5″, so we had to get a little creative. The Soho sconces have a 5″ backplate and were only available in a nickel finish, but I remedied that with a few thin coats of matte black spray paint. To cover the exposed wall, we found an item called a ‘goof ring’! It’s essentially a ring of metal to help conceal areas where drywall or tile are cut too large for a fixture. I sprayed those black as well, and now no one’s the wiser (except you, because you’re reading this). Down the road, the homeowners may look into vintage tile reproduction to replace the tiles that were cut too small, in which case, they can remove the goof ring altogether.

The Soho sconces could be mounted up or down, but we chose to hang them down so they would be more in line with your face when standing in front of the sink. And do you see that sweet tile detail that intersects with the mirror? Now that the lights hang downward, you see the detail in its entirety!

The other big difference with the vanity is that the mirror is different. Initially, we thought we’d replace the cabinet for a height better suited to the space, but on a whim, Scott removed the old mirror, and we discovered the original curved shape from decades ago! Rachael brought the door to a local glass repair shop, and they cut a new mirror to perfectly mimic the shape. The curved top was our lucky find, and we’re still pinching ourselves. Ugh, we love it so, so much.

For extra storage, we installed a sleek Moen glass shelf above the toilet, and I couldn’t resist sprinkling in some low-light loving ferns. Every room needs some greenery! You can see below, right above the toilet, there’s a darker yellow spot where an old anchor used to be. Pete used a tile epoxy to touch that area up with a similar color, but the plants help to conceal those areas, too.

The toilet was replaced with a Kohler Memoirs design, which matches the existing pedestal sink perfectly:

On the other side of the room, we tucked a polished chrome shower rod on the inside of the alcove. In doing so, the end hardware is concealed, and it somehow gives off a more custom feel when paired with a classic waffle weave shower curtain. The curtain itself just barely kisses the floor, which is a look I didn’t think I’d love, but it ended up feeling luxe and intentional.

The shower head was more of a challenge due to the curvature of the alcove, but this was a quick fix; we used a shower arm mount with this Kohler Fairfax shower head to raise it up!

Lest you think that the entire makeunder went off without a hitch, I’d like to share the one area that didn’t go as planned – the tub filler. We wanted to keep those cute hot and cold valves, so our idea was to replace only the tub filler (the one you see below leaks and has a deteriorating finish). The plumbing can be accessed from a closet behind the shower, but all of the pipes are completely buried beneath many, many layers of plaster and mortar! Being a vintage bath, we were bound to run into an issue, and this was it. We’ve saved this task for a professional.

To complete the refresh, we had (too much?) fun playing with the many nooks and crannies around the room. We neatly folded fluffy cotton washcloths above the sink and onto the vintage towel bars. I also tucked one of their daughter’s teeny, tiny dinosaur figurines into the unused soap cubby (you know I had to!), and we hung her baby silhouette with a piece of rope from a towel hook.

A lot of other tasks go on behind the scenes to get a vintage bathroom up to snuff. Caulk. Tile repair. Grout scrubbing, polishing of existing fixtures and touching up the peeling black paint of the window. These aren’t physical things, but they’re the checklist items that make waves in how a space not only functions, but how it makes you feel. These are the small details that add up in a big way.

Before the final styling, we kicked Pete and Rachel out of the bath, and Scott and I hung the towels just so, twisted LED bulbs into the sconces and lit a candle. We welcomed them into their ‘new’ vintage bathroom, and they were overjoyed! Most importantly? That pretty tile is now, finally, the star of the show. 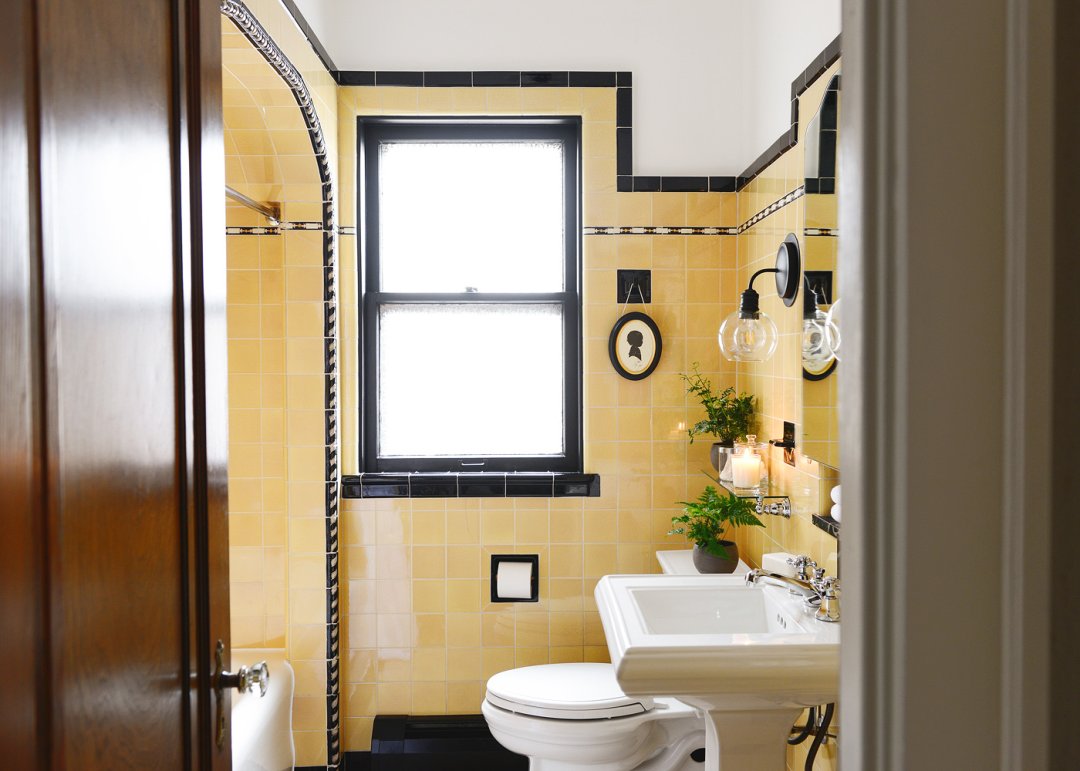 Show Hide 63 comments
« How We’ll Be Renovating Our Bathroom to Maximize ROI
Vlog: A (Business) Q+A, Part I of II »
BACK TO THE TOP +